From the National Football Foundation and the College Football Hall of Fame:

IRVING, Texas (Aug. 6, 2014) – Since 2011, The National Football Foundation (NFF) has partnered with Rogers Redding, the national coordinator of College Football Officiating (CFO), to help generate awareness for the rule changes in college football through a series of regular columns distributed by the NFF. With training camps in full swing, the month of August provides the perfect time for the NFF to highlight the key rule changes and officiating points of emphasis that will be in effect during the 2014 season.

The Four Major Rule Changes for the 2014 Season

Part of the penalty for targeting fouls is that the player is ejected from the game. In games where instant replay is used, the player is returned to the game if the video review shows conclusively that there was no forcible contact to the head and neck area or with the crown of the helmet. If this happens in 2014, and there is not another personal foul in combination with the targeting foul, then the 15-yard penalty is also erased. Examples of combination personal fouls include roughing the passer and kick or catch interference. In cases where such fouls are accompanied by a targeting call, the 15-yard penalty will still be enforced, even if the player’s ejection is overturned.

In games where instant replay is not used, there is no opportunity for an immediate video review. A 2014 rule change now allows the referee to review a first-half foul at halftime when video is available at the game site. If this halftime review convinces the referee that the player should not have been ejected, he may return to the game for the second half. Such a review is optional. There must be a conference policy in place, or pregame agreement between the teams in interconference games, which specifies where the review will occur and what kind of video will be used. The decision of the referee is final and may not be appealed.

Second-half targeting fouls may still be reviewed by appeal to the national coordinator of officials to determine whether the player is required to sit out the first half of his team’s next game. This rule is unchanged from 2013.

An extension of the rule for roughing the passer, a new rule in 2014 prohibits the defense from making forcible contact at the knee or below to an opponent who is in a passing posture. It is designed to eliminate knee injuries on plays where the defensive player forcibly drives a shoulder, helmet or forearm into the lower leg of the passer. This rule is not intended to prevent the defense from making a legitimate wrap-up tackle in which the contact is at or below the knee.

4.      Player Numerals Must Contrast With the Jersey

Last year the rules committee clarified the rule requiring that the player’s uniform number must clearly contrast with the jersey itself. During the 2013 season there was an interpretation that introduced a penalty for a team wearing a jersey that does not comply. This interpretation has now been codified as a rule.

Beginning in 2014, the referee will ask the team to change into legal jerseys before the game begins. If the team does not change, it will be charged with a timeout. The same opportunity will be offered during the time between the first and second quarters, at halftime and at the beginning of the fourth quarter, and again a timeout will be charged each time the team does not comply. This means that a team could potentially burn four of its allotted six timeouts for the game because of the illegal jerseys.

This year college football officials are being asked to pay special attention to two areas of the game that are of concern to the rules committee and to other stakeholders: management of team personnel on the sidelines and the sportsmanlike behavior of players.

Management of the sidelines has emerged as a concern in the past few years, especially with the increase of no-huddle offenses. This style of play means that coaches are much more likely to be on the field right before the snap and then again too quickly after a play is over. Many coaches and players are still unaware of the fact that the six-foot white border around the sideline is no-man’s land. This restricted area must be clear while the ball is alive as well as during the period after the play is over until the action has ceased. Officials will work with teams to keep this area clear but closer attention will be given to enforcing the sideline rules, which will include imposing appropriate penalties when necessary.

Player behavior is also becoming an issue as unsportsmanlike conduct is starting to drift back into the game. Good sportsmanship and respect for the opponent are firmly entrenched characteristics of college football that must be maintained. Spontaneous enthusiasm and positive celebration are encouraged, but when players extend this into self-promotion and taunting of the opponent, officials will be firm about calling unsportsmanlike conduct fouls. Some of these acts, such as the “throat slash” or vulgar behavior, are automatic fouls. Actions of this ilk have no place in our game, and officials are instructed to throw the flag when these occur. The game and its image are advanced and strengthened when everyone involved conducts themselves in a manner that embraces good sportsmanship.

“We want to protect the game and to help reduce critical injuries with this message: play the game hard but stay away from serious fouls,” said Redding, who claimed the NFF Outstanding Football Official Award in 2010 after a three decade career in the Southwest Conference and the Southeastern Conference. “By making changes, we are signaling that the safety of the student-athlete stands at the very top of our list of priorities. The clear intent is to change player behavior.”

The CFO functions as the national professional organization for all football officials who work games at the collegiate level, and the organization held its annual winter meeting of conference coordinators for football officials in late January for the second consecutive year at the NFF headquarters in Irving, Texas. The NCAA Football Rules Committee subsequently adopted the CFO’s recommendations to create a safer environment for football student-athletes. 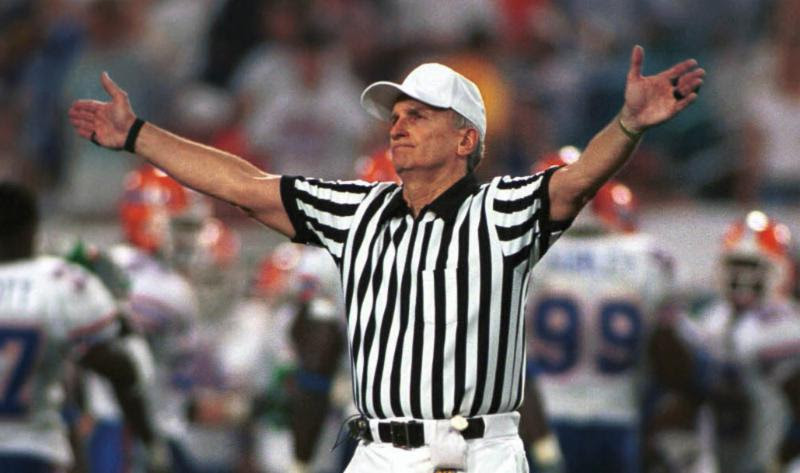 The NFF has partnered with Rogers Redding, the national coordinator of College Football Officiating, to help generate awareness for the major rule changes for the 2014 college football season.

SharpTusk is a featured blogger on Hog Database. He won "2009 Blog Of The Year" as voted by members of SportingNews.com and has posts referenced by local and national sports writers. Sharp began writing about Arkansas Razorbacks Football during the coaching change in 2007 and hasn't stopped. He has an eye for interesting stats, and an occasional penchant for creative writing. He's sure to keep you coming back for more.

Previous Entry: A Few Minutes With Sportingnews.com’s Matt Hayes
Next Entry: Robb Smith on the Defense After First Day of Contact